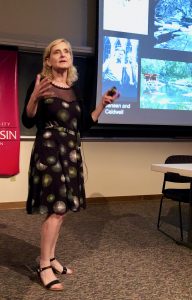 On Wednesday, September 25, the Department of Planning and Landscape Architecture had the pleasure of kicking off the Tishler Lecture series by hosting Julia Bachrach. Julia is the author of The City in a Garden: a History of Chicago Parks. She has previously served as the preservation planning supervisor for the Chicago Parks District, and is an alumna of the Landscape Architecture Program at UW-Madison.

Julia gave a riveting lecture on the history of the parks system in the Chicago region, and highlighted several notable figures who had significant influence crafting the “urbs in horto” (City in a Garden). She highlighted how Chicago went from being a swamp, named the “smelly onion” by the native Algonquian people, to a crowded, 19th century industrial city, desperate for greenery and open space to serve as an oasis of serenity within the bustling city. Julia detailed how figures like Daniel Burnham with his renown Chicago Plan, Fredrick Law Olmstead with his design of Jackson and Washington Parks, Jens Jensen’s “Prairie Style” redesigns of Humboldt, Garfield and Douglas Parks, and Alfred Caldwell’s design work and leadership of the Chicago Park District crafted the green ribbon of connected parks within the City that provide areas of intrigue, refuge and recreation for the City inhabitants and tourists alike.

The Tishler Lecture Series is funded by the William and Betsy Tishler Endowment, as well as the Department of Planning and Landscape Architecture.