A few hours northwest of Madison lies Coon Rapids, Minnesota. A city MS Urban and Regional Planning student, Daniel Besinaiz, has become familiar with during his summer internship. For the past three months, Daniel has been working with the City of Coon Rapids as a Community Development / City Management Intern.

Daniel said the position has allowed for a variety of experiences in municipal government. 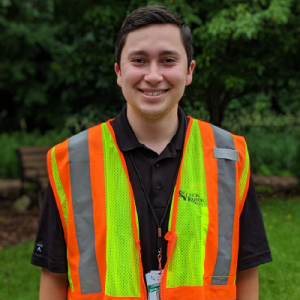 However, most of his interactions fall under the City Manager’s Office as well as the Community Development and Human Resources departments. Daniel has worked on multiple projects including brainstorming methods for engagement with residents, connecting with major employers in the city to ensure a favorable business climate, and drafting planning reports for city council meetings. As he wraps up his internship in the coming weeks, Daniel’s working on completing the Metropolitan Council’s Livable Communities Housing Survey, drafting a Planning Commission Memo, and updating Quarterly/Annual Economic Reports. Whew, that’s a lot!

Aside from working on projects for the city, Daniel has had the opportunity to attend the Summit on Government Performance and Innovation. The two-day conference that focused on finding solutions to make the government more efficient, was full of networking opportunities and talks from government officials across the country.

Daniel has accomplished a lot in just a few short months. As he approaches his final year at UW-Madison, we look forward to watching his accomplishments continue. Congrats on the terrific summer internship Daniel!